This article first appeared on The Trek

I’ve spent much of my backpacking time hiking alone. As most of my friends are near my age (pushing 60) and working, there’s not been much interest in walking in the woods for days with me. So, when my current girlfriend (and former wife) Michelle expressed an interest, I was all in.

Equipment was simple. I’m one of those guys that’s often upgrading my gear, but never selling the old stuff. (I have spork service for eight.) The only purchase needed was a pack that fit her, which made birthday shopping pretty easy. (We went with Osprey Exos 48.) Besides, if she hated the experience, there’s always Ebay. The tough part would be to pick and plan a first trip. I was looking to provide more than a short hike in/hike out trip, but nothing too brutal either. 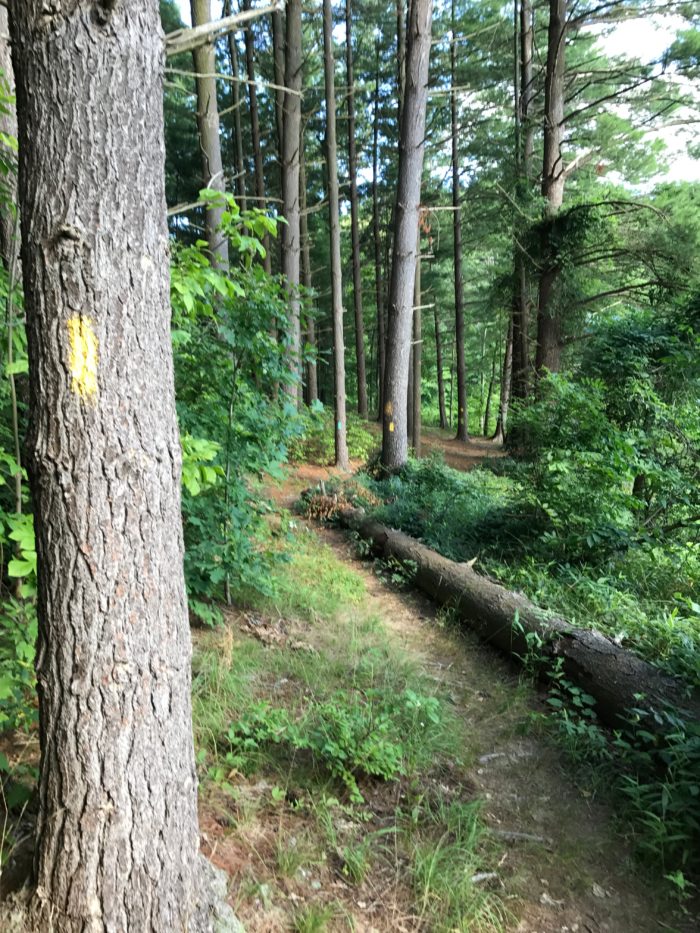 There are several loops within a few hours of Cincinnati that can be done with a single night of camping. I chose a 21-23 mile loop around Burr Oak Lake for a few reasons.

1. The distance would be a challenge for her as a new backpacker, but doable in two days.
2. The distance was short enough that I could bring extra items like a pillow and camp chair to improve conditions.
3. The route had some elevation changes, but no climbs over 400 feet.
4. The entire route is almost completely within Burr Oak State Park; scenic and well maintained.
5. There are several possible bail out points if things went badly.
6. There is a campground at the halfway point with flush toilets. Cathole training can wait until another trip.

I was planning on waiting until fall for the trip, but a break appeared in the weather forecast that I couldn’t pass up. I was looking at the upcoming Sunday and Monday both with highs around 80, lows in the 50’s with low humidity and no chance of rain. July in southern Ohio almost never looks that good. Michelle was able to get off work at the last minute and we were a go.

With plenty of food and more than enough clothes my pack weighed 18 pounds, Michelle’s was 14 (plus water). Several water hydrants are near the trail so one liter each starting out would be plenty.

We started out clockwise from the backpack trail head around 2 pm figuring on a two mph pace to get us to camp by early evening. The weather was breezy, warm and the low humidity made for pleasant hiking. The trail quickly established itself along the shoreline with small grades and constant views of 660 acre Burr Oak Lake. Occasional summer wildflowers added some color to the healthy forest. There were plenty of people around as we passed near the park’s lodge and Dock #2, but met no one else actually on the trail. Dock #2 contains not only a boat ramp and dock, but also campsites, water and pit toilets. 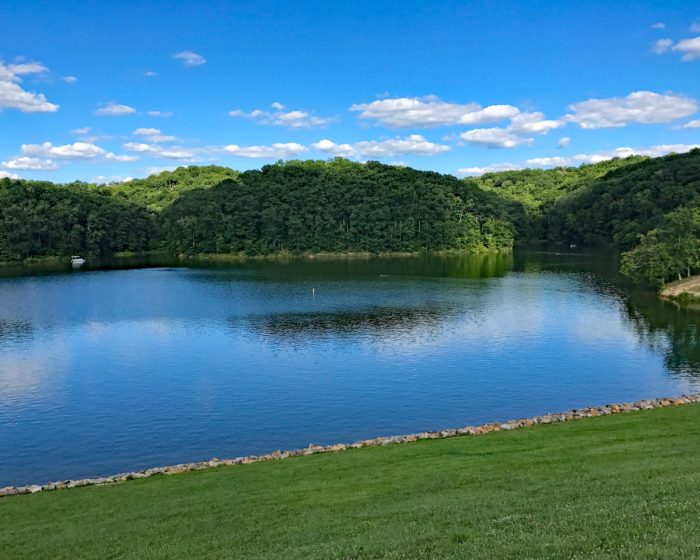 At six miles we walked across the lake’s dam and stopped at a well placed picnic table for a snack and to reload the water. We were right on schedule with no issues with either equipment or personnel. Walking down the opposite side of the lake, we could see where we had passed earlier. Luckily, the trail remained relatively flat. A couple deer sightings broke up the next few miles as afternoon turned to evening.

After passing our third dock of the day, the trail turned into a road walk. Although it was short and flat, there’s nothing like road walking to make a day seem tough. By then though, the end was in sight; at the top of the steepest grade of the day. I spent the next ten minutes silently cursing my choice of hikes, but suddenly we were in the campground. At just under 11 miles, we were done for the day. There were plenty of open sites and I picked the first flat spot we saw, right across from a shower building. As a bonus, there was a pop machine to provide cold sugar, caffeine and mixer. Things were looking up. I broke out a couple camp chairs and a new Thermacell Backpacker Mosquito Repellent device and we had one of my more comfortable backpacking camps.

After a couple freeze dried dinners and some doctored Pepsi, it was time to turn in. It was still a bit light out, but between the full moon and lights all over the shower building, complete darkness wasn’t coming anyway.
We shared a Big Agnes Copper Spur, the two person version. It was plenty roomy for the two of us, but had me reevaluating sharing it with my brother on a future excursion. That may become a two tent trip.

The bottom of Michelle’s feet were bothering her a bit in the morning. As she slipped her shoes on without needing to untie them, I took a guess as to why. After I had her use some friction block and snug up the shoes, we started out. The morning was cloudy and muggier than the forecast had called for. We soon dropped into a deep valley when I heard some noise and stopped. “Is that rain?” Michelle asked. Thank you Accuweather! (I often wonder if the reason many people refuse to believe the long term predictions for Climate Change is because short term weather forecasts are so often spectacularly wrong; but that’s a discussion for another time.)

As warm as it was, the rain actually felt pretty good. The lightning was a little disconcerting, but the rain felt good. Spotting a deer with a new fawn was a highlight of the morning. Breaking through thousands of spiderwebs was not. It was obvious nobody else was on the trail. The topography got more interesting/rugged with several 200 foot climbs and drops. We walked near multiple small caves within the valleys until hitting a flat stretch near the upper reaches of the lake.

The rain turned on and off several times through the morning making the trail wet, but not overly slippery. At the very end of the lake there is a creek crossing that can often just be jumped across. Not this day however. As we stood there gauging the depth, a large carp swam up through our crossing. Since her shoes and 2nd pair of socks were already fairly wet, Michelle kept hers on to wade across; possibly a mistake. 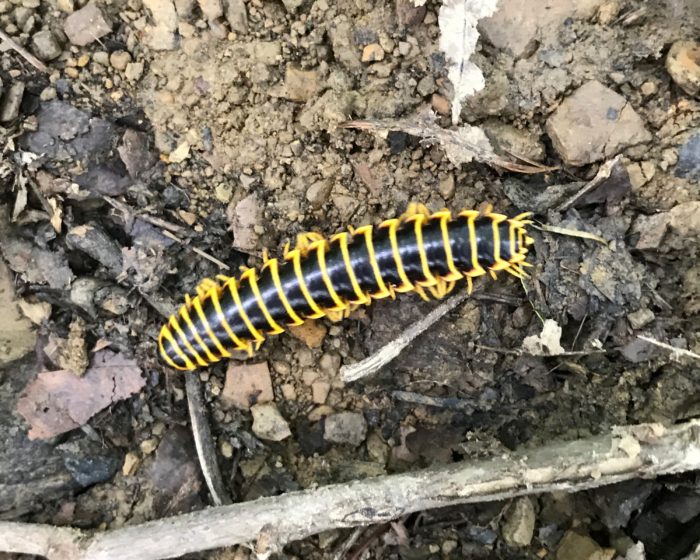 Once back heading south, the trail was flat and easy for a couple miles. Herons were thick out in the shallows and toads and other critters were frequent along the trail. We took a snack break at a spot overlooking the scene. The heavy foliage of one of the park’s namesake oaks kept us dry through another shower. Michelle’s feet were starting to suffer though. I broke out the moleskin to cover the start of a couple blisters, had her reapply the friction block and handed over my still dry spare socks. The minor first aid was an immediate relief. I was hoping that it would also hold off any further damage for the rest of the hike. 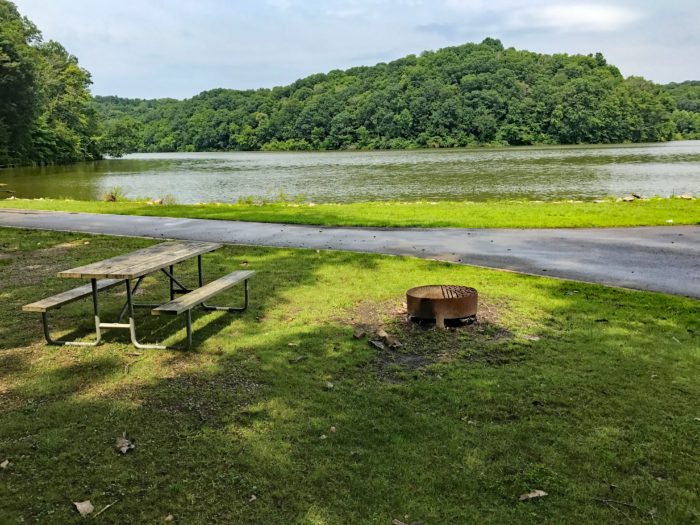 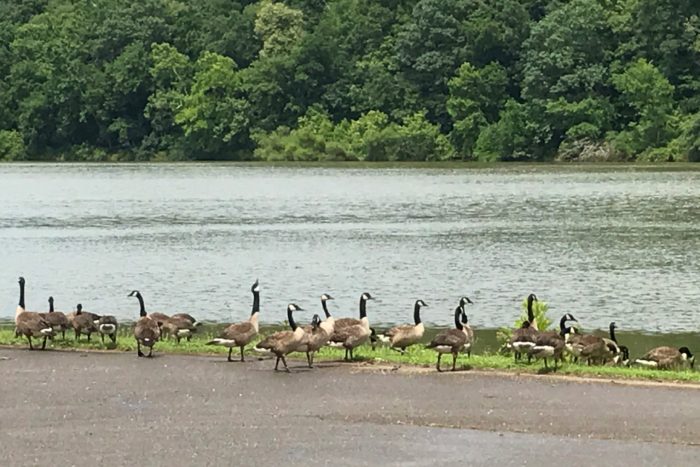 A couple more relatively flat miles brought us to Dock #3 with water, restrooms and campsites. It worked out to be right at noon and in between showers. Taking advantage of the timing, we had lunch at a picnic table watching several dozen Canada Geese nearby. It was also decision time. We could continue to follow the shoreline for another 4+ miles to the car. However, another trail promised a more direct, and hilly, route that looked to be just under 2 miles. Michelle’s feet were holding up, but for how long? A thunderclap sealed the decision; away from the lake we would go.

Despite the added climbs and drops, the miles were covered quickly and by 1:30 we exited the woods right by the car. Michelle had successfully completed her first backpacking trip hiking an impressive 21 miles over two (short) days. It was straight to the park’s lodge for a burger and a beer to celebrate.

If I had it to do over again, I’d possibly pick a shorter hike. Michelle did walk a little slow for the next couple days. Running water and a pop machine at camp made for a nice transition into backpacking though. Regardless, she told me she enjoyed it and I’ve yet to see the backpack appear on eBay. Perhaps there will be a new backpacking partner in my future. 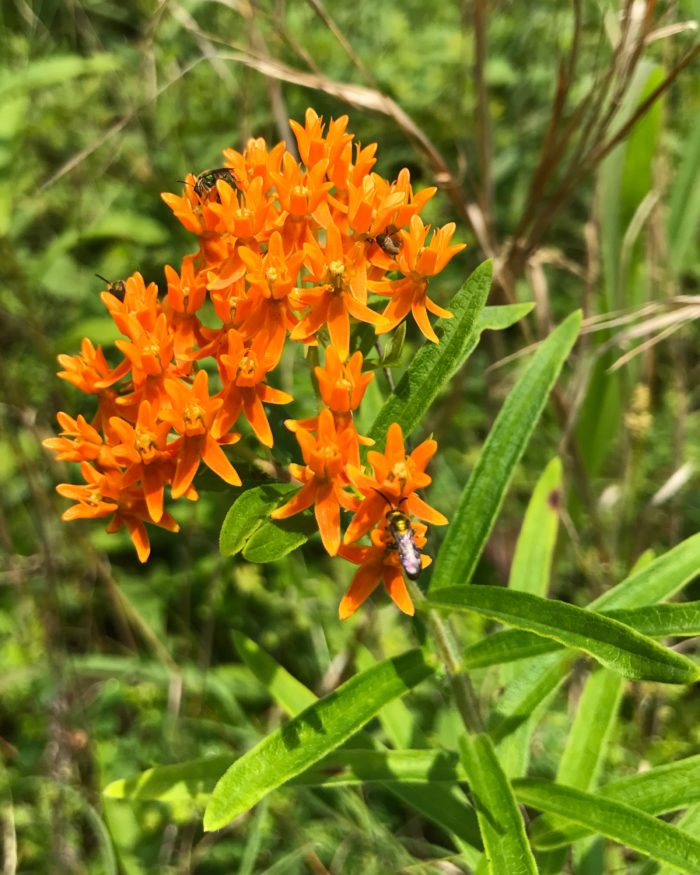 From Athens, Ohio, take State Route 13 North to east on State Route 78, to park entrance on the left. Park at Backpack Trailhead.

The 21-23 mile loop includes three fee-based camp areas. A longer trip is possible by taking the Wildcat Hollow Backpack Trail from the northern reaches of the loop into Wayne National Forest. Free camping is allowed in the National Forest. 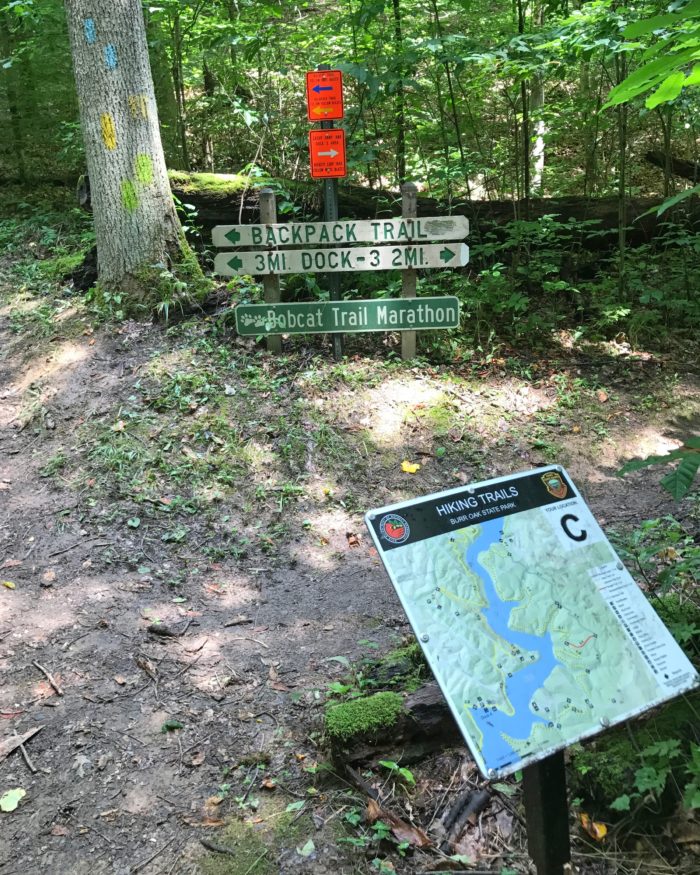 The trail is well maintained and very well marked, though some sections may be impassable during very wet periods. Burr Oak Lake is a flood control reservoir with the water level controlled by the Army Corps of Engineers. Most of the trail is flat to rolling with a few steeper grades generally 200 vertical feet or less. Additional information is available at the park’s website.

Ramblings from the wilderness and semi-wilderness